Story of the Claddagh Ring 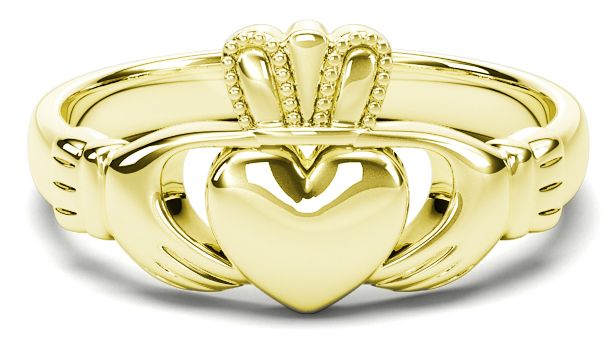 Symbolism of the Claddagh Ring

The beautifully designed Claddagh Ring is quite distinctive with its two hands clasping a heart and surmounted by a crown. It is a monument to love and friendship with the two hands said to signify friendship, the heart representing love with the crown symbolising loyalty.

Legend of the Claddagh Ring

There are many legends about the origins of the Claddagh Ring. Perhaps the closest to the truth is a tale of Galway native Richard Joyce.

Richard, a member of the Joyce Clan, was bound for the West Indies Plantations. When on route, the ship was intercepted by Algerian Pirates in rough seas. The Mediterranean pirates captured all on board and sold them into slavery.

He was bought by a skilled Moorish goldsmith and quickly recognised Richard's talents. He trained him as his apprentice and fourteen years passed with Richard becoming close to his master. He became a master craftsman with enduring thoughts of the love he left behind. He forged the now famous Claddagh Ring as a symbol of Love and Loyalty.

In 1689 the newly crowned King of England, William III sent his ambassador to Algiers to demand the release of all British slaves. In an attempt to make Richard stay his master offered him the hand of his beautiful daughter in marriage and half of his own wealth.

However Richard declined and left for Galway where his sweetheart awaited his return. Upon his arrival he presented the ring to her as a proclamation of love and duly asked for her hand in marriage. The young woman, who remained faithful to Richard over his fourteen year absence, accepted his proposal and they were soon married. The essence of the Claddagh Ring Richard presented was for Love and Friendship to reign forever.

Other Legends of the Origins of the Claddagh Ring

One story of the origin of the Claddagh Ring surrounds another of the Joyce Clan; Margaret Joyce. Margaret a wealthy widow of Spanish merchant Domingo de Rona, returned to her hometown Galway in 1600 where she married the City's Mayor, Oliver of Ffrench. The legend tells us that Margaret built the many bridges of Connacht with her own wealth. One day on site at one of the bridges under construction, an eagle flew passed dropping the now famous Claddagh Ring into her lap to reward her for her generosity.

Another account of its origins is of a prince who fell in love with a house maid. The prince intended on marrying this woman however he had to persuade her father of his honourable intentions. He crafted the ring with hands representing friendship, heart symbolising love and crown declaring loyalty, and proposed to the woman with it. Upon hearing the meaning and symbolism of the ring her father gave the relationship his blessing and they were married.

Growth of the Claddagh Ring

Since its inception the Claddagh Ring has held a special place in the Hearts of the Claddagh People. Traditionally the ring was worn by the women of the Claddagh and passed down from mother to daughter on her wedding day throughout generations.

For a long time this tradition was restricted to the Claddagh and Connemara (including the Aran Islands) however that was all to change in the nineteenth century. When the Great Famine struck people fled the impoverished Connemara region and with them spread the tradition of the ring. Hundreds of thousands of Irish who were forced to leave their shores brought with them this tradition.

Today the Claddagh Ring is worn by people the world over as a universal symbol of love, loyalty and friendship.

Galway City, located on the West Coast, is the third largest city in Ireland. It is the only medieval city in the province of Connacht and has a complex history spanning over 800 years.

Also known as "The City of the Tribes", the name refers to the Fourteen Tribes (Merchant Families/Clans) that led the city between the 13th – 17th Century. One of these Clans, the Joyces, led to the creation of the now famous Claddagh Ring.

Claddagh is said to be the oldest fishing village in Ireland and is located where the River Corrib meets Galway Bay, just outside the old city walls. With the walls now long gone the village has merged with the rest of the city however the area still retains its old unique character and identity. 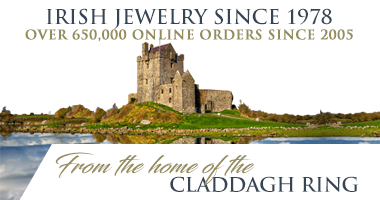 The largest retailer of Irish & Celtic Jewelry in the world, we offer quality Jewelry at the best prices with a dedication to customer satisfaction. When shopping with us you know that you are getting quality Irish Jewelry direct from the manufacturer without the middlemen for overall Best value. We back up those claims with our Best Price Guarantee and 60 day money back guarantee. Read more about us