Valentine's Day Sale! Up to 60% off Retail + Free Gift

This Claddagh Ring [Selection_stone] The current selection is made from . Set with a and accent . . . . [general] [Claddagh_short] 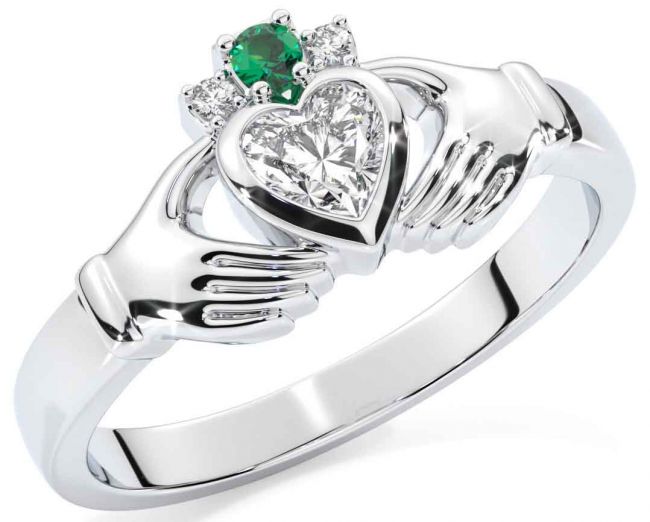 This Claddagh Ring comes in Gold and Silver set with a choice of Diamonds and Gemstones. The current selection is made from . Set with a and accent . . . .

The Crown represents Loyalty, The Heart represents Love and the Hands represent Friendship. The Claddagh Ring originated in our home, Galway, Ireland and is now a World Famous symbol associated with Ireland. 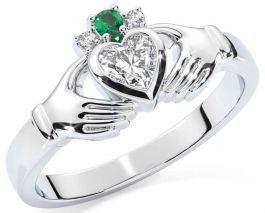 The Claddagh: the crown represents loyalty, the heart represents love, and the hands represent friendship. It is widely known as a symbol for great friendship. This ancient Gaelic design is also used in engagement rings and in traditional wedding rings for the Irish. If worn on the right hand with the heart facing out it means you are single, facing in means you are dating someone. If worn on the left hand with the heart facing out it means you are engaged and facing in you are married. An original symbol of the "Fisher Kings" of the Galway town of Claddagh, Ireland, (pronounced clada) the design was first fashioned into the traditional ring back in the 17th Century during the reign of Mary II. Legend has it that an Irish young man, Richard Joyce, bound for the West Indian slave plantations - no doubt the Irish Caribbean island of Montserrat - was kidnapped himself in rough seas by a band of Mediterranean pirates and sold to a Moorish goldsmith who over the many long years of his exile helped him perfect the skills of a master craftsman. When in 1689 King William III negotiated the return of the slaves, Joyce returned to Galway - despite, it said, the Moor's offer of the daughter's hand in marriage and a princely dowry of half of all his wealth. Back in Ireland a young women had never stopped faithfully waiting for her true love to return. Upon which time when he presented her with the now famous Royal Claddagh gold ring - a symbol of their enduring love. Two hands to represent their friendship, the crown to signify their loyalty and lasting fidelity, and the sign of the heart to symbolise their eternal love for each other.

Reviews
Verified Reviews
We're currently collecting product reviews for this item. In the meantime, here are some from our past customers sharing their overall shopping experiance.
<div id